Upon returning from US fieldwork, I only had a number of weeks to create a conference poster and be on my way to the airport. I was preparing for the Cities on Volcanoes 9 (CoV9) international conference in Puerto Varas, Chile.

I did not know what to expect from the country or the conference. Luckily, both exceeded my expectations. I learned a lot from those who viewed my poster to the talks and other posters, met/made many new contacts and friends, as well as seeing some familiar faces.

CoV is an international conference occurring every 2 years hosted at an alternative city in the vicnity of a volcano(es). The aim is to bring together volcanologists, disaster managers and other researchers concerned with volcanic impacts on society, through the promotion of inter/multi-disciplinary research and establishing colloboration between physical and social scientists, as well as stakeholders like town planners. The particular theme for this year was “Understanding volcanoes and society: the key for risk mitigation”. CoV is part of the IAVCEI (International Association of Volcanology and Chemistry of the Earth’s Interior), which represents all volcanologist throughout the world.

I am not entirely sure how many delegates there was, but it certainly had to be over 500. There was such a rich representation of research across the world, in poster and oral form. There was a lot of them so it was impossible to sit in all talks and speak to everyone about their poster. My priority is to stick the talks and posters that are relevant to my project as well as my research interests, then if I have the time to see/read others, then I will. 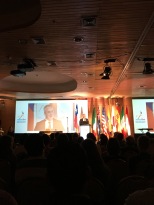 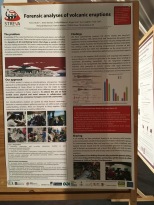 The conference itself had opportunities to visit some volcanoes (Chaitén, Calbuco, Osorno and the Laguna del Maule Volcanic Complex) before, during and after the conference. Unfortunately I could not afford any of them but luckily the ones during the conference were included, to visit either Calbuco or Osorno. I chose Calbuco, as it erupted last year. As this was a recent eruption that was on the ‘door step’ of Puerto Varas, it was talked about a lot at the conference. Wired has a nice summary of the activity.

We went to an area that was impacted by lahars, but a year on the rivers/streams have been cleared and artifically transformed, mainly by moving the bigger boulders on the banks. There was a primary school in this area…right under Calbuco to be exact. We walked up the river to a destroyed fish farm. The building was still standing, but was far beyond being operational again with the giant boulders that the lahar carried down. Walking up a little bit more we came to the waterfall in which the lahar came down, it was impressive to see if not slightly unnerving that a vast amount of water filled with volcanic material flowing down the river with such severity. The most interesting part was that we went back to the school and got first hand experiences from a number of individuals from the surrounding villages. The main things that I took away from their experiences were: 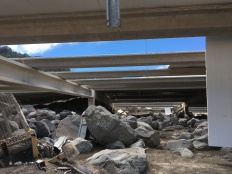 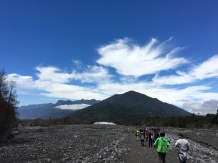 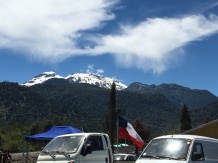 Overall, I am so glad I went. I met some great people, learned a lot and have had valuable feedback from those who came to look at my work on the historical impacts of La Soufrière on the agricultural industry. Most importantly, it gave me confidence and belief in my work and that I could be a valuable member of the social volcanology community.

I am looking forward to the next one in 2018, when it returns to Naples! Hopefully I will be a stage to give a talk.

Oh I completely forgot to add this to the post on my experience at a conference!

Refer to here for the VMSG2015 abstract booklet (my abstract is page 84) and click on the PDF on Volcanic risk perceptions for the poster I presented!

If we are to get technical here I have actually been to another one which took a conference-like approach (minus the posters). The volcanologists at Lancaster hold a ‘Volcano-Ice’ day, which brings together volcanologists who study all aspects of volcano and ice interaction. I remember most of it was centered around Icelandic volcanism but I cannot complain. I mainly went along to it to see what research was going on and it was a day to escape coursework. I enjoyed it.

Now for the Volcano and Magmatic Studies Group (VMSG) conference it was not only fun, informative, socialable but I think it was character-building for me too. One thing, I had never been to Norwich before so that was an experience to try and find the hotel I was staying at, another was stepping outside my comfort zone and having over 200 people under one roof. I am an odd person, I find being surrounded by large numbers of people uncomfortable. But I managed.

Oral and poster presentations (including my own poster) captured a whole spectrum of research. Geology, geochemistry, petrology, geophysics, serious games…that is not even all of it, it was such a rich diversity. But that is what volcanology is. You have researchers that study volcanoes and use different ways to study them. Basically, one volcano is viewed and interpreted in so many different ways.

My poster on risk perceptions was a little different (it was mainly based on socio-psychological concepts) but I never felt my work was undervalued or treated differently. Quite the opposite in fact. Volcanologists who had expertise outside my area of interest were reading my poster, asking questions and generally seemed to appreciate how I approached my research.

It was interesting to observe the social dynamics of the conference. People who knew each other really well tended to congregate together. People by university also clustered together. But at the same time, there was mingling (slipping in some magma science there!). It did find it slightly overwhelming that the larger volcano research universities greatly outmatched the tiny number of volcanologists at my university (1 academic, me and 4 students) but I suppose that does not matter, it is what makes us different as a little volcano research group (if you could even call it that?).

It reminded me of Collectormania (or any other kind of Comic Con). Full of people passionate about volcanoes (comics) but have preferences to sub-disciplines (different comic companies and characters). Minus the cosplay and fangirling. Okay that was perhaps a silly comparison.

There was also a workshop on volcanic risk so being interested in it, I went along. There was a smaller number of people and there was certainly great discussions happening around the various topics covered in the workshop. I really enjoyed that and I even added to the discussions. Everyone had different experiences to share and exchange. I will remember for a long time the experience of a woman who was involved in responding to the Mt. St. Helens eruption in the 80s.

As an early-career researcher I found it so valuable to hear the experiences of those who are well established in this vast discipline. I just hope that one day I contribute just as much.

I am looking forward to the next VMSG in Dublin…it is another place I have not been to!

So I have been to my first ever conference (and still techniqually at): the Volcanic and Magmatic Studies Group (VMSG) in Norwich.

I will bring you the full report in due course!

Update: here is the full experience post and links to a couple of PDFs.